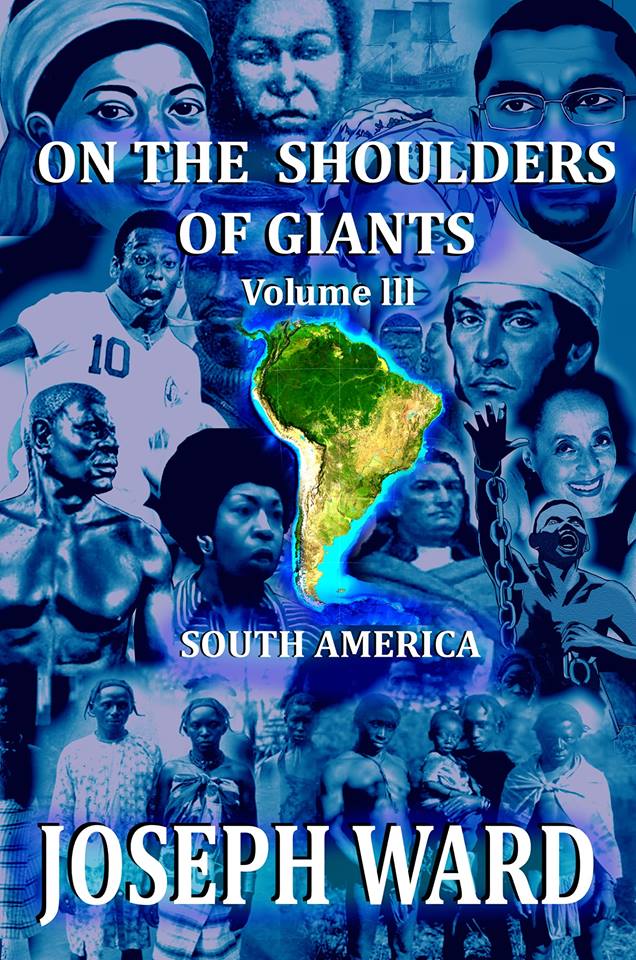 On the Shoulders of Giants Vol: 3 Central America available Now  In Paper Back & Amazon Kindle.

The continent of South America is home to the largest population of African people outside of Africa. Brazil, Colombia, Peru, and Ecuador are four countries with the highest populations of African people in the world. Argentina, Chile, Uruguay, Venezuela, Bolivia, Paraguay, Guyana and Suriname are the remaining countries that make up the continent. According to data collected by the Trans-Atlantic Slave Trade Database, 12.5 million Africans were shipped to the New World, 10.7 million were able to survive the trip across the Atlantic. Of the 10.7 million Africans who reached the Americas 90% of them were taken to the various countries throughout South America. Through my research, I have learned that South America is rich in African history and culture. During the history classes we took while attending school, our teachers were rarely equipped to teach the history of African people inside and outside of the United States. Therefore we were greatly deprived of the powerful stories of the many African people who opposed white supremacy and ensure the freedom for their people for generations to come.


In this volume I introduce you to the following heroes; Victoria Santa Cruz, Soccer legend Pele, María Remedios del Valle, Quamina Gladstone, Juana Ramirez, Jose Olaya, The Ndyuka People, Zumbi dos Palmares, Dandara dos Palmares, Bonifacio Pinedo, Susana Baca, Benkos Bioho and Tupac Amaru II. These twelve heroes risked their lives and their careers for their people. They were leaders in promoting their cultures helping ensure their future generations are able to thrive. Our heroes understood the importance of the youth knowing their history so they fought to protect their future. The Ndyuka People of Suriname are a group of African people who survived the Middle Passage, escaped slavery, waged war against their enslavers, and created settlements that exist to this day.


This book gives you some insight into the struggles African people endured at the hands of white supremacy over the last five hundred years. We have been led to believe that African people contributed nothing to humanity and were only civilized when Europeans enslaved them. The indigenous populations of South America were also subjected to slaughter and enslavement at the hands of white supremacy. Some of the indigenous populations aligned themselves with the Maroons (Africans who escaped slavery) and played a part in the many wars against Spanish, Dutch and Portuguese enslavement.


Music, art, dance, martial arts, politics, law, agriculture, guerilla warfare, and topography are some of the many skills and cultural expressions Africans and the indigenous populations brought to South America. By the time the new world was “discovered” by Europe African people had already traveled to the continent many times, and some African people even settled in the Americas. The majority of the African populations that make up South America were brought by the slave trade, but according to historians such as Ivan Van Sertima, evidence exist to prove the African presence before any European reached any part of the western hemisphere. The African diaspora has produced some of the greatest people to walk this earth, so I provided you with information about twelve unsung heroes that we can celebrate and learn from. I hope you enjoy this volume and please visit www.amazon.com to leave an honest review of this book. Thank you very much!!!!
Add to Cart